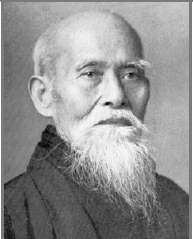 The word “Aikido” is made up of three Japanese characters known as Kanji. The first “ai” means to meet, to come together, to harmonize. The second “ki” means energy or spirit. The third “do” means the way of. When combined the meaning is: The way of harmonizing with the Spirit of Universe.

Aikido’s founder Morihei Ueshiba, was born in Japan on December 14, 1883. He devoted himself to hard physical conditioning and eventually to the practice of martial arts, receiving certificates of mastery in several styles of jujitsu, fencing, and spear fighting.

In spite of his physical and martial abilities, he felt very dissatisfied. He began delving into religion in hopes of finding a deeper significance to life, all the while continuing to pursue his studies of the martial arts. By combining his martial training with his spiritual studies, he created and named “Aikido” in 1942.

Aikido is not a way to fight with or defeat enemies in the common sense. Rather it takes negative, ill-intended energy and allows it to dissolve without conflict. Aikido training is a cooperative, not competitive, endeavor. Techniques are learned in cooperation with a partner, not an opponent. The students are taught to use caution, and control the speed and force of the techniques in accordance with the abilities of their partner.

This training is not only applicable in the Dojo, but can easily be incorporated into an individual’s daily life to bring peace and reduce physical and emotional stress.